LIBERATION FROM A FEMINIST PERSPECTIVE

LIBERATION FROM A FEMINIST PERSPECTIVE

In this paper, I will explore the concept of libration from a feminist perspective, based on passages from the Therigatha, the Verses of Enlightenment of ancient Buddhist nuns. In contrast to the present widespread belief that a woman has to transform herself into a man in order to gain final liberation, in the Therigatha (here after Thig.) and the Bhikkhuni Vagga of the Samyutta Nikaya (hereafter Bhikni-SN.), we find many accounts of nuns who freed themselves from samsara (the cycle of birth and death) in this lifetime. The life stories of ancient nuns are very telling. Some of them after listening to the sublime Dhamma, freed themself from personal attachment, such as pride & conceit at regard to one’s beauty or status. To name a few, they were Bhikkhuni Khema (Thig. 6:3), former Queen Khema of Magandha kingdom; Bhikkhuni Abhinanda, (Thig. 2:1) formerly princess Abhinanda of Sakya clan. Many of them expressed the sense of liberation on being go beyond the conventional laws based on social prejudices.

More than 2500 years ago, a Buddhist nun in India expressed her sense of liberation when she renounced the world, saying, “Now I am freed of three crooked things: mortar, pestle, and a crooked husband!” When she had done away with all longing and fetters, she claimed to be free from birth and death (Thig 1:11). In a similar tone, but more vivid is this exultation uttered by a nun of old days who even did not have a proper personal name, but called after her child, Sumangalamātā

“So freed! So freed!

So thoroughly freed am I —from my pestle,

my shameless husband & his sun-shade making,

my moldy old pot with its water-snake smell.

I cut with a chop.

Having come to the foot of a tree,

I meditate, absorbed in the bliss:”What bliss!”

[Thig. 2:3, translated from Pali by Thanissara Bhikkhu, Access to Insight]

From a survey of Buddhist literature, we can see that, in Buddhism, the search for liberation is individual and personal. The freedom that Buddhist practitioners seek is the freedom from desires and liberation in this context means getting out of ignorance & tear asunder bondages held by craving and wanting veiled by that very ignorance. Most of the bondages that Buddhist practitioners aspire to break free of is personal, however, their heroic striving on the path of enlightenment set good example for all of us, even at a distance of few thousand years later, needless to say their impacts on the contemporary society. Here is an autobio-data of a nun who gained enlightenment when listening to sublime Dhamma, then renounced the world with all its comforts & promises of young, wealth and beauty.

“Born in a high-ranking family with much property,

I was the daughter of Majjha, the treasurer.

Sons of kings sought for me,

sons of rich merchants longed for me.

One of them sent my father a messenger, saying,

I will give in return eight times her weight in jewels & gold.”

But I, having seen the One Self-awakened,

paid homage to his feet, sat down to one side.

He, Gotama, from sympathy, taught me the Dhamma.

And as I sat in that very seat, I attained the third fruit [of non-return.]

Then I cut off my hair, and went forth into homelessness.

Today is the seventh day since I made craving wither away.

The frequent theme of freedom from desires and deliverance from afflictions (kilesa & āsava) occur many times, in different circumstances.

“Seeing the world’s deep misery, we both went forth

And are now both free of cankers, with well-tamed minds.

Cooled of passions, we have found deliverance;

Cooled of passions, we have found our freedom.”

We talk about the afflictions (kilesa) and fetters (samyojana) that a yogi needs to break through or transcend to reach liberation. In Buddhist practice, we talk about the liberation of the mind from emotional inclinations (ceto vimutti) and from intellectual prejudices (paññā vimutti). A striking example of the liberation of the mind from emotional inclinations is the expression of Theri Kisagotami (Thig. 10:1), who blasted Mara (the tempter), saying that she no longer had a desire for sons, husband, or men. A vivid illustration of liberation from intellectual prejudices is the expression of Theri Soma (Bhikni SN 5:2) in her answer to Mara’s challenge about women’s wisdom:

In the case of liberation from emotional bondages, a woman is made to see the impermanence in life, and if she is able to accept it as a natural law, her heart is set free. Due to the conditioned perception and evaluation of women in Indian society for a long time, women were wired to be dependent on men, and she is considered of some worth only if she bears a son. When such a women lost her child or dear relatives, she suffers the more due to attachment and dependency. However, when she gains the insight of impermanence and its causal effect of suffering, she will be able to rise up from that mess of conditioned occurrences. The insight enables her to see changing and distresses caused by changes are universal events, they happen to everyone at time, then she is freed from emotional reactions such as: “Why this happen to me! Why me!” Example of this insight are found in many cases of enlightened nuns in ancient time, like Patacara and Kisa Gotami who suffered the loss of a child (or children and all beloved ones), after encountering Dhamma taught by the Buddha himself, they recovered from the emotional distress, and accepted the fact of life, they entered the Order of nuns, then worked hard to reach final liberation. This is Ven Patacara verses (Thig 5.10) of triumphant after a wise reflection:

“Ploughing the field with plough,

sowing the ground with seed,

So why is it that I, consummate in virtue,

a doer of the teacher’s bidding, don’t gain Unbinding?

Washing my feet, I noticed the water.

And in watching it flow from high to low,

my heart was composed like a fine thoroughbred steed.

Then taking a lamp, I entered the hut,

checked the bedding, sat down on the bed.

And taking a pin, I pulled out the wick:

Like the flame’s unbinding was the liberation of awareness.”

After freed herself from the bondage of ignorance and craving, Patacara became a very effective teacher who gave instructions to many people, especially, the Dhamma uttered by her are the best medicine for grieve stricken women. And here, the exclamation of many such a women after hearing a discourse on the nature of ignorance and craving that held them to this distressful world:

“Today my heart is healed, my yearning stayed,
Perfected deliverance wrought in me.
I go for refuge to the Buddha, the Sangha, and the Dhamma.” (Theg … )

In Samyutta Nikāya, Bhikkhuni  Kisa Gotami answered Mara, the Tempter, that she’d done away with the longing for men, whether they related to her as son or husband or father. Her life story and the circumstance that led her to the Buddha’s teaching shows a very peculiar case of a woman in Indian conditioned society. Her personal problems and the way she managed to overcome them is peculiar.  Having gone through many ups and downs in her life, the final liberation came to her as the realizing the four noble truths. This is a common ground that all enlightened persons came to, disregard of their gender. Thus her verse in Therigatha stated:

“One should know suffering, the cause of suffering and its cessation, and the Eightfold Path; (these are) the Four Noble Truths.” [Therig, (vv. 213-215), translation from Inspiration from Enlightened nuns]

Now we will come to cases of liberation through wisdom (paññā-vimutti) or in other words it is the freedom from intellectual prejudices. Ven. Bhadda Kundalakesa, the former Jaina female ascetic encountered the Buddha and became the rare case of Bhikkhuni ordained by a single encouragement of the Buddha: the “Come bhikkhuni!”. Her life circumstance that led her to be a female ascetic and a refuted debater in India 2600 years ago is very dramatic. We have no time to talk about all episodes in her life here, but this brief narration reported by her in Therigatha is very distinctive.

“I travelled before in a single cloth,

With shaven head, covered in dust,

Thinking of faults in the faultless,

While in the faulty seeing no faults.

When done was the day’s abiding,

I went to Mount Vulture Peak

And saw the stainless Buddha

By the Order of Bhikkhus revered.

Then before Him my hands in añjali

Humbly, I bowed down on my knees.

And thus was I ordained.

Debt-free, I travelled for fifty years

In Anga, Magadha and Vajji,

In Kasi and Kosala, too,

Living on the alms of the land.

May many merits accrue to him!

Who gave a robe to Bhadda for

Free of all ties is she.”

[Therig. 5-9, translated from the Pali by Hellmuth Hecker & Sister Khema]

The nuns of old day were braver and well informed, indeed. Once, liberated from wrong view and wrong practice, an informed woman can help others to break through the veil of superstition. Here is a conversation of a laywoman at the Buddha’s time. Her name is Punika, though being born into a low caste and had to work as a servant, she was able to give some very wise advice to a Brahmin, who is a man and of much higher caste than her. On seeing him jumped into cold water as a ritual of purification, she asked politely and on hearing his age-old unfounded belief that warding off evil kamma, she refuted him as follows:

‘One, through water ablution,

is from evil kamma set free?’

In that case, they’d all go to heaven:

all the frogs, turtles, serpents, crocodiles,

& anything else that lives in the water.

& any other evil doers,

would, through water ablution,

be from evil kamma set free.

If these rivers could carry off

the evil kamma you’ve done in the past,

they’d carry off your merit as well,

and then you’d be completely left out.

Whatever it is that you fear,

that you’re always going down to the water, don’t do it.

and now you’ve brought me back to the noble.

I give you this robe for water-ablution.

Let the robe be yours. I don’t need it.

If you’re afraid of pain, if you dislike pain,

then don’t do any evil kamma, in open, in secret.

But if you do or will do any evil kamma,

you’ll gain no freedom from pain,

even if you fly up & hurry away.

If you’re afraid of pain, if you dislike pain,

go to the Awakened One for refuge,

go to the Dhamma & Sangha.

Take on the precepts:

That will lead to your liberation.

Finally, we come to this inspiring story of enlightenment in which all Buddhist connotation of liberation are ascertained.  Bhikkhuni Gutta, having reflected on the Buddha’s advice given to her, she admonished herself in line with the Buddha’s intention in the verse:

for which you went forth,

“Gutta, devote yourself to the goal

for a dear son of your own.

Don’t fall under the sway of the mind.”

beings in love with Mara’s realm,

and uncertainty as the fifth —

you won’t come to this again.

—cutting through [all] the fetters —

you will make an end of suffering & stress.

free from hunger in the right-here-&-now

you will go about totally calmed. 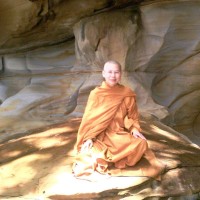